It's time for another story in "Roads to Recovery"!  I am very excited about this one.  In 2012, I packed up everything and moved to Minnesota to live and work in Lanesboro at the Commonweal Theatre Company.  Little did I know that I would find my happy place an hour south in Decorah, Iowa.  In this unassuming little town I found my favorite coffee shop, summer adventures, and a best friend!  I had countless amazing days and nights in Decorah, where I would squirrel away to when I was sick of putting on my happy face for everyone.  One of the awesome people I met in Decorah was Josie, who works at the Oneota Co-op.  She would ring me up for my Vegan Turkey Mango Madness every week and we would chat about this and that...and before we knew it, we were great friends!  Since my tenure at the Commonweal, we have remained in touch and through her amazing blog, I discovered that we have more in common than I already thought.  I was thrilled when she agreed to share her story here, because it has been an inspiration to me since my early days of recovery. 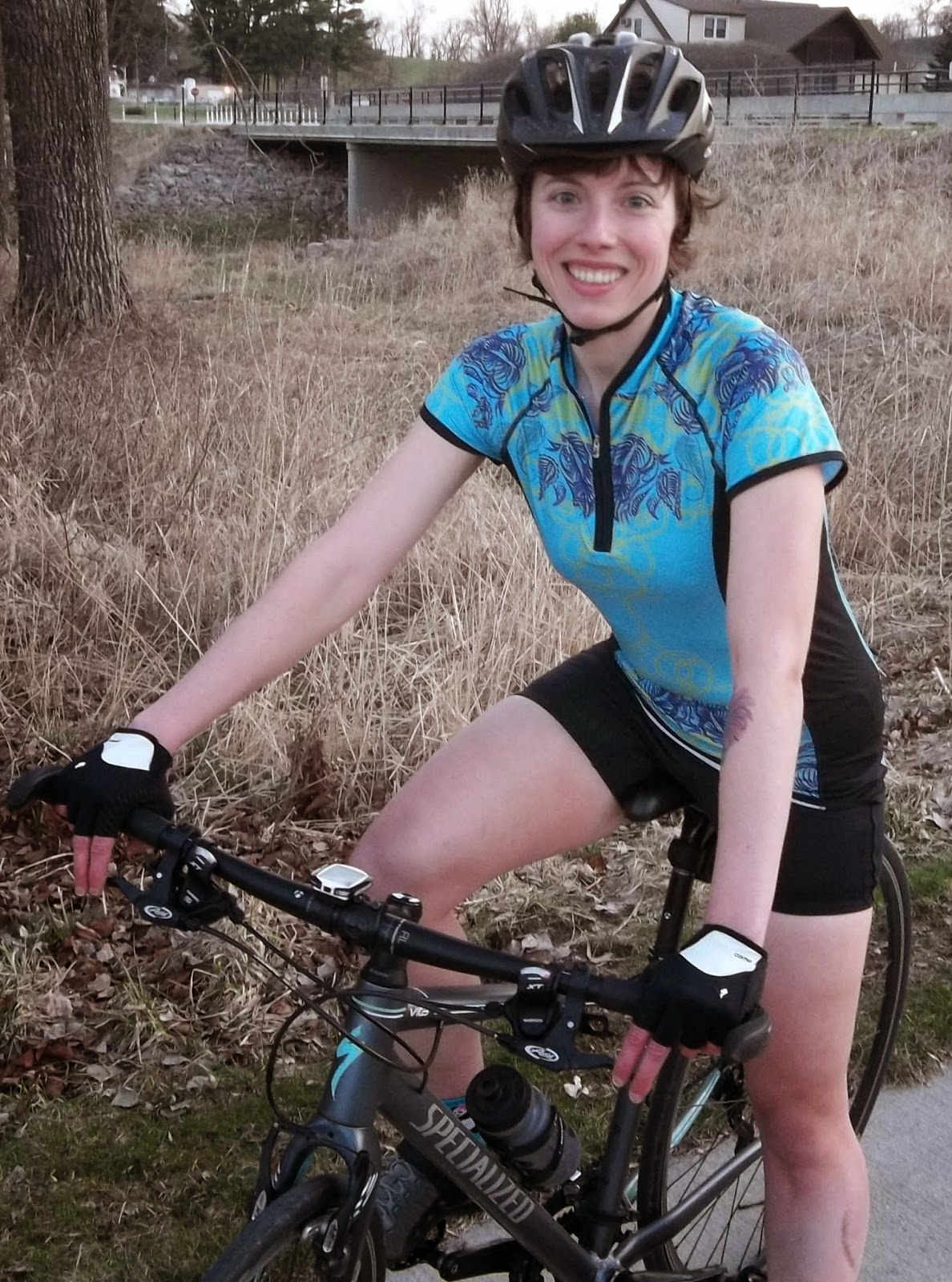 Something that most people aren’t aware of is that I’ve struggled with an eating disorder. Primarily bulimia but at times I minimized what I ate and purged that as well. It’s something that has taken a long while for me to stop feeling shame over. Over the years I’ve heard comments about how disgusting I was or the typical “Why would anyone want to throw up?”
People looked at me like I was an unwanted fungus; no one seemed to get the concept that I had an eating disorder. It’s an addiction and has probable genetic links. Long story short, I felt very alone at times and it took me several years to finally curb my addictive behavior. However, that does not mean that my ties of ED are cut completely. Not at all. I still struggle with (on a regular basis) self-image issues that seem to completely baffle those who know me. That is one of the residual after-effects of ED and something that flares up often.

I was dealing with ED during my junior year in high school and my senior year. Eventually I cut back on my destructive habits and would periodically fall back and forth for several years until probably 2007. My relationship with food was still pretty bad, but I managed to stop purging for the most part (minus extremely stressful situations.) I’m not entirely sure why I was able to stop, but I managed to-however my main vice then turned into cigarettes.

After several years, in 2010 I decided I was tired of doing things to my body that were negative. I can’t replace one vice with another unhealthy vice and expect to have everything go away. So I quit smoking. It was easy because I for some reason was never really addicted to cigarettes; not sure why I was lucky.

It wasn’t until 2012 I decided I needed to find something to do for my physical health. I’ve never enjoyed exercise, especially if it felt like work or was too mundane. I was doing a kickboxing routine for awhile and enjoying that. Then one day I woke up and said “I’m going to buy a bicycle.” I was tired of driving to work on beautiful days, wasting the last few minutes of my life before work in a hot and stuffy car. It seemed so pointless. However, allergies and (and unknown exercise induced asthma) prevented me from wanting to walk to work. I thought a bicycle would be a great way to get me to work without too much physical exertion. However, I still had fears of car traffic and worried if I would even be a good rider. 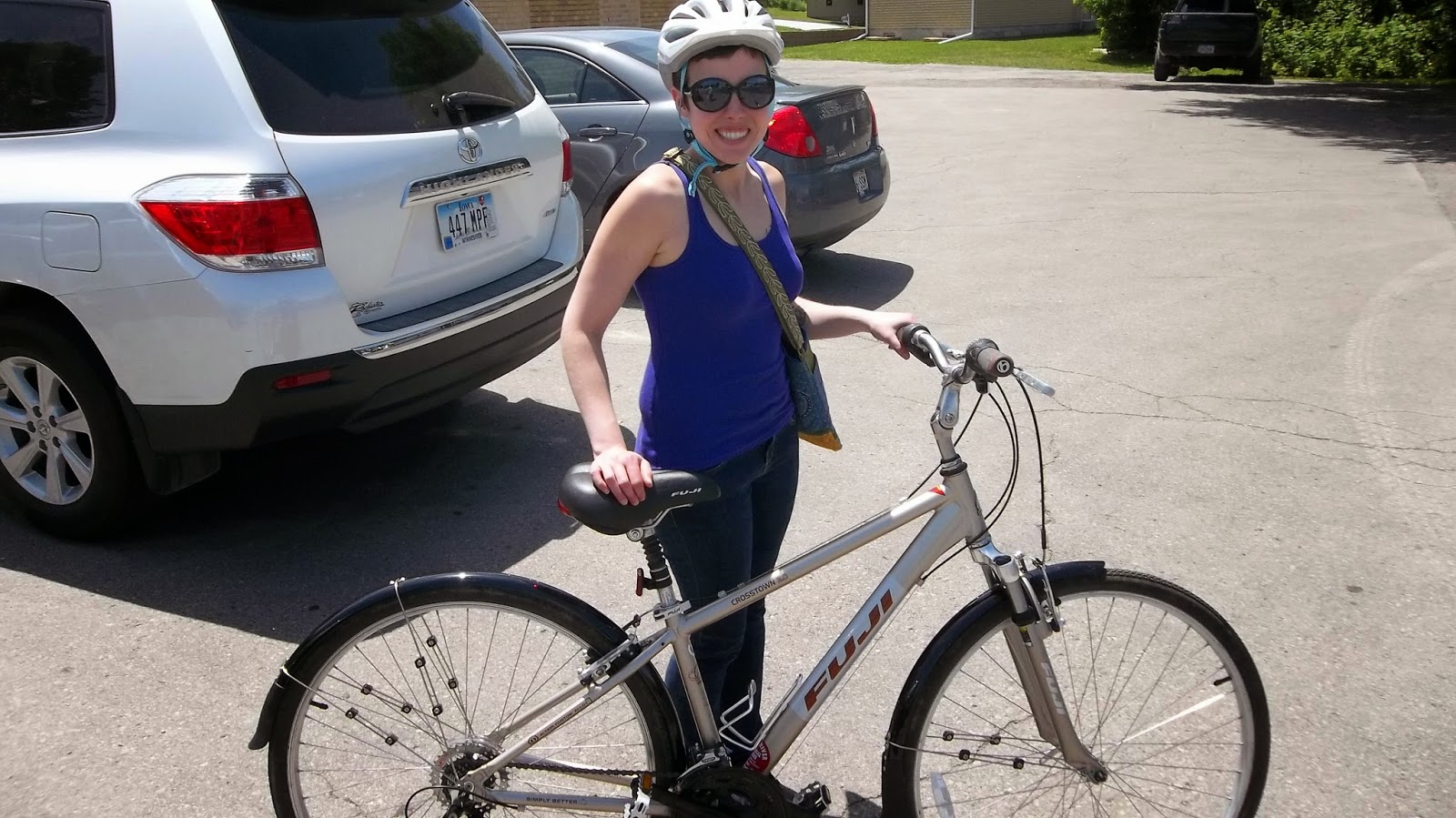 That Friday I bought a bike. It was clunky, heavy, and homely…but I loved him. I named him Sir Richard the Ironhearted and rode him almost every day. That Monday I rode him on the Trout Run Trail, on the flat part past the Hatchery and back. I found I really enjoyed riding! It was exercise but not! I wasn’t bored and it didn’t feel mundane. My mind had found peace and that felt amazing.

My first few months of riding my bicycle were huge in terms of opening me up. The exercise helped reduce my stress and keep my depression at bay. I felt less edgy. I was becoming more confident in my handling skill. I became happier. I realized with all of these changes that more had to happen-finding out what I needed/wanted, divorce, and finding love again.

I’ve been riding regularly now since 2012 and have graduated to newer bicycles and different styles of riding. You’ll find me not only on paved surfaces, but on mountain bike trails too! This is not to say that everything is rainbows and sunshine…The very real and frustrating aspect over my mental self is continually making peace with food and my body image. Cycling has changed my body and for me, it took a long time to actually notice the changes. I’m much more muscular and toned than I used to be. The other thing about working out regularly? You need to eat more to fuel your body. That was a hard lesson for me, and still is. I have to eat food…especially if I want to keep riding or help my body recover from a hard ride. I would ride or increase the duration of my rides and find myself getting hungry much earlier than I planned or anticipated. It took time (and still requires effort some days) to accept this and allow myself to have sustenance. My personality likes to dance with the idea that inhabits my addictive personality…that I have to ride in order to eat. It is so completely not true. This is what makes the much-needed rest days difficult for me sometimes. The addictive personality that likes to hide in the dark corners of my mind says “You didn’t bike, you shouldn’t eat.” Okay, perhaps I should limit the chocolate that I intake but that doesn’t mean I shouldn’t eat anything at all, that’s ridiculous!

This is one of the reasons why many people say that you never really are “cured” from an eating disorder; you manage it for the rest of your life. Riding my bicycle(s) had really helped me overcome many obstacles that have been in my way for years. It’s given me the courage to make changes in my life, to become healthier, and to do something good for myself that I long-denied. It’s one of the ways that I show my inner-person that I really do care about me and my body. It’s the only body I have and I want it to be strong.
I may never look like the models on TV with the so-called “ideal” body. No. That is something that I have been working on to accept for many years now. I’m not going to magically grow taller, have bigger breasts, longer torso, firmer stomach, or delicate ankles. Nope. I’m going to be short with broad shoulders, powerhouse legs covered in bruises, magnificent arms, and a damn fine booty. 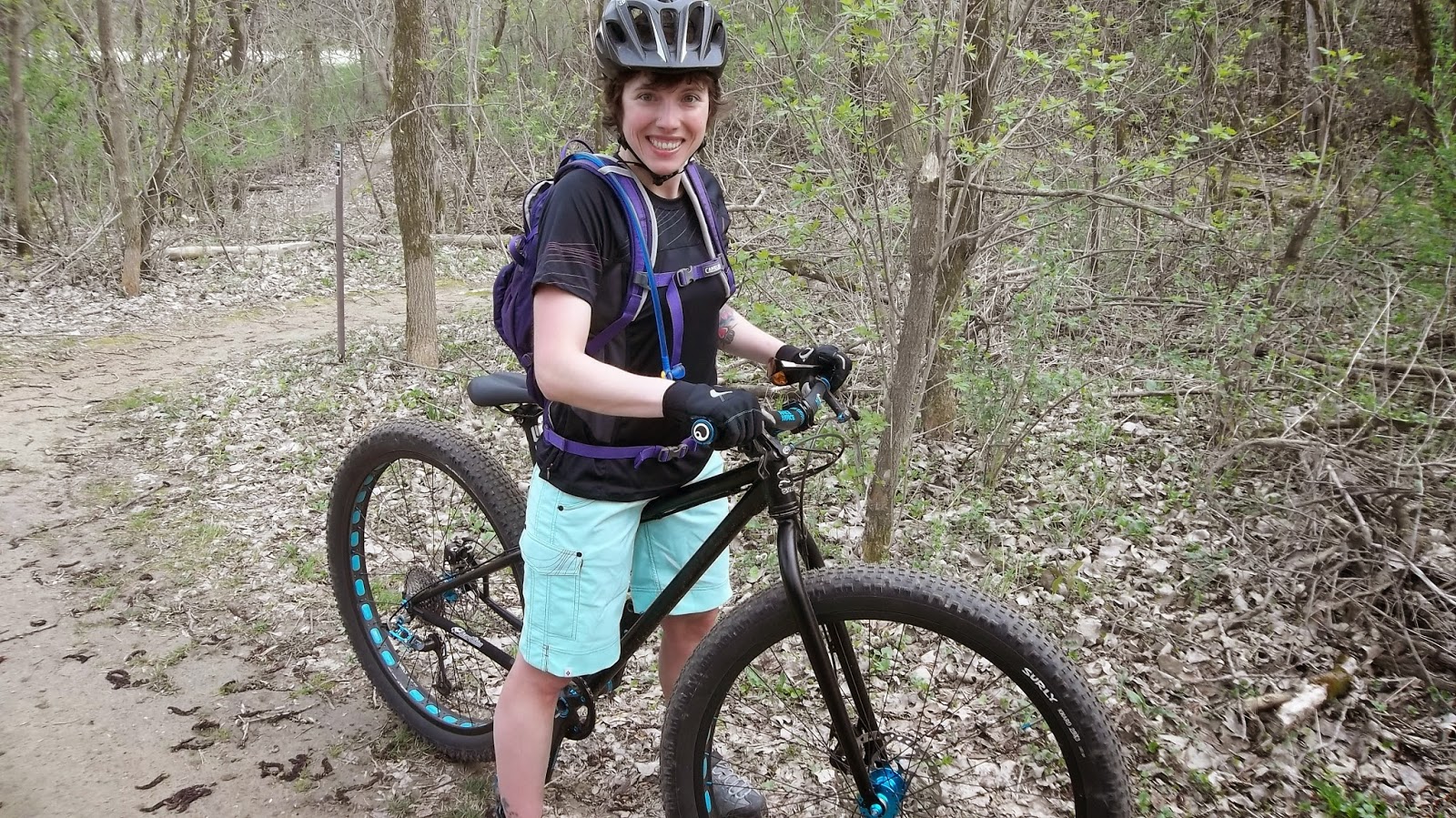 I want a body that helps me climb the rocky hills, maneuver down sketchy turns, and pedal over the roots that lie in my path. I want the body that works hard, has “battle scars” and shows other women that they can accomplish great things on a bicycle. I want the body that eats the food it needs in order to keep on riding, because that is what it loves to do.
I can’t lie. There are days where I fight against myself, but I’ve learned to tell that inner voice of self-destructive behavior to just take a hike. I’ll rest when I need to, eat when I feel hungry, and keep working on loving myself for me. 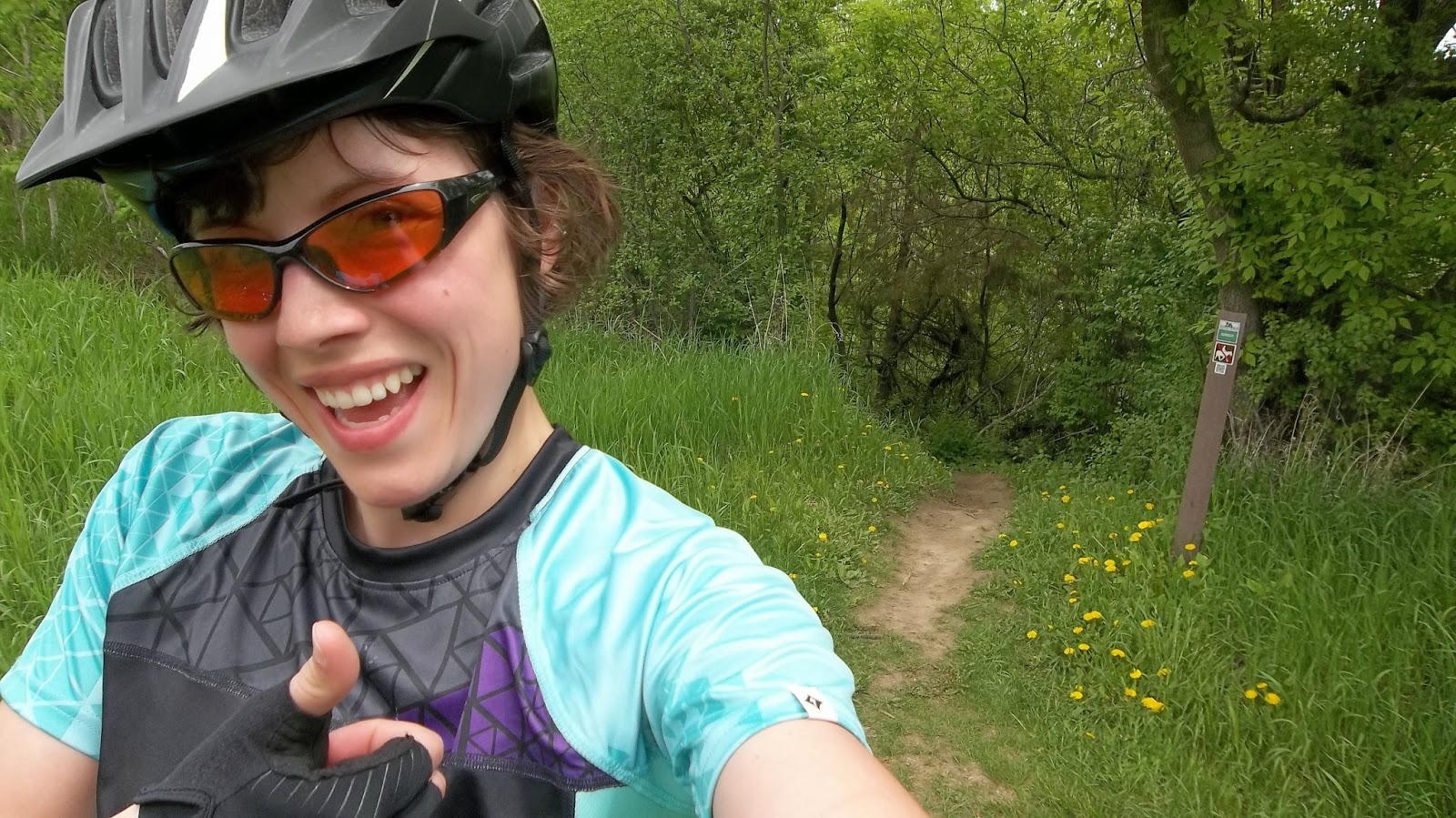 Thank you, Josie!! You're story and passion for cycling are things that inspire me every day. You are an amazing woman! Please read Josie's blog, Life on Two Wheels and like it on Facebook! I love reading about her biking adventures and getting a peek into her life in Decorah. I can't wait to come back and visit!