So hold on to the one’s who really care,
In the end they’ll be the only ones there…

And so, we end at the beginning.  With a little orange CD that came out 20 years ago. 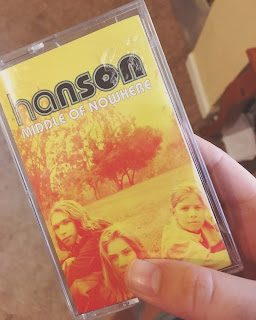 Thank you for joining me as I work backwards through Hanson’s six studio albums and discuss each one in depth (THIS TIME AROUND, UNDERNEATH, THE WALK, SHOUT IT OUT, and ANTHEM for those of you who are catching up)!  I’ve had a blast writing each of these posts, and I can’t believe the release of their greatest hits album is only days away.  What’s more, I can’t believe that in two short weeks, I’ll be starting my MOE tour follow along!!  I seriously can’t wait to be in my happiest of places, in the crowd, my three favorite dudes on the stage, my friends surrounding me.  Anyone who has ever been to a Hanson show knows how special they are.  All our friends are there!

But none of this would be happening without the release of Hanson’s first major studio album, MIDDLE OF NOWHERE, on May 6th, 1997.  Of course, most of the population knows Hanson for MmmBop.  It’s incredible how deeply ingrained that song is in the collective consciousness of everyone who was alive in the late nineties.  We all know it.  There was no escaping those three blonde boys singing about flowers, the inevitability of time passing, and the fact that friends will come and go but if we’re lucky, a few good ones will stick around through it all.  Of course, not everyone knew that was what the song was actually about (thanks to Taylor’s STELLAR enunciation), but that didn’t matter.  It was still number one all over the world.  Hanson sold out arenas and caused mayhem wherever they went because of that song.

But, since I know that Hanson’s career is so much more than MmmBop, I’m not going to waste this whole blog post talking about it (even though, honestly I could).  Middle of Nowhere is, at it’s very core, a quality record.  Sure, they were young.  Sure, Zac was literally an eleven year old boy facing the reality of fame before he had developed some pretty basic social skills.  Sure, Taylor’s voice was just beginning to change when the album was released.  None of that MATTERS because the album itself is packed with perfect hooks, funky beats, and the groundwork for a long musical career.  Mainstream music was going through a transition in 1997. Grunge was on it’s way out and Pop was racing to the forefront.  Hanson hit it big right before boyband mania (which is why they’re often lumped in with groups like BSB and NSync), when the world was ready and willing to let happy, poppy tunes into their lives.  Middle of Nowhere had no chance of failing.  Mark Hudson was a collaborator, The Dust Brothers produced it, and it walked the line between nineties pop and Hanson’s older influences perfectly.  It felt vintage even back then, proving that no matter what, people will always be sluts for nostalgia.

When the minutes seem like hours, and the hours seem like days
Then a week goes by, you know it takes my breath away… 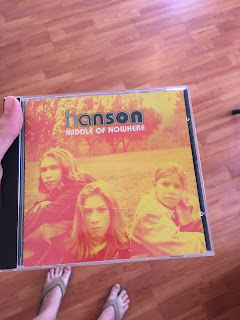 Even though during the first few years of their mainstream career, Taylor was the one who made boys and girl alike question their sexual identity, I’m going to take a little time to talk about the oldest brother, Clarke Isaac Hanson.  The most unproblematic of the three, the most vocally consistent, the man who wears suits for every occasion.  But this was before he cut his hair and started his three piece habit.  This was when he was still a lanky, brace faced teen, who was forced to take the lower harmony solely based on the fact that his voice was the only one that had dropped.  So let’s talk about that voice.  Track 10 begins and we’re given a reprieve from Taylor’s angsty whine (that’s not a bad thing, I love Taylor’s angsty whine!!!).  Suddenly we hear this rich, warm, baritenor step out and take the lead.  It’s rich and full and if you’ve ever heard the original recording of More than Anything you’ll know that he knows how to croon.  It’s amazing to me to look at pictures of Isaac from 1997 and say to myself “This is the same boy that is singing on that record.  This awkward, ponytailed teenager.  THIS IS HIM.”  His voice has barely changed from that moment, which is...not normal.  And it’s not that he hasn’t improved, it’s just that he really was THAT good vocally when he was fifteen!  His voice is the least affected of the three; that is to say the other two definitely have some habits they developed by trying to sound a certain way.  Not a bad thing, just a thing.  I do it too.  We all do it.  But Isaac’s voice is almost 100% just...Isaac.  Nothing but Ike love here, people.  Nothing but Ike love. 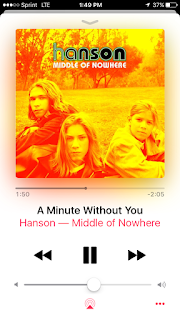 It started at a bus stop in the middle of nowhere…

I could go on for pages and pages about Middle of Nowhere.  How, even after all this time, I love it.  How one time I was wearing a Hanson shirt and my friend Kyle was like “Middle of Nowhere is a great record,” and then I cried talking about how they were KIDS and THEY DID THAT.  How songs like Madeline and Look at You are some of my favorites to see live.  How for a few years, Hanson was in the spotlight in front of record breaking crowds and sneaking out of the back of venues so they wouldn’t be MAULED by screaming fangirls.  How it makes me think of when I was just a little squirt, trying to convince my sister that she loved Taylor Hanson (she didn’t...I...I was the one that loved him...kids are weird) and teasing her for it.  How sometimes now I try to sing Zac’s harmonies full voice and I feel like I’ve pulled a muscle.  How grateful I am that it exists.  How that no matter what, Hanson will never shy away from the music on this album.  It’s part of their story, and part of ours.

“It ain’t no secret where we come from, so we where our history like a badge of honor.”