How a gym class helped my recovery... 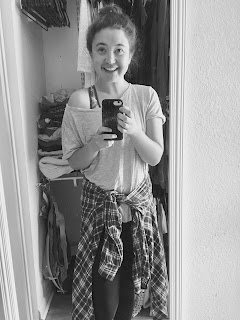 I have a strange relationship with The Gym.  We fell in love during my freshman year of college, when suddenly I had unlimited, free access to the campus gym at NKU.  I have this funny little disorder that makes me obsess and fixate on certain things, and since I was in the middle of a department that was already fixated on image, it was an easy thing to get into.  At first I really enjoyed it!  I would go every few days with Robyn or Seth, sweat for half an hour, and trudge back to the commons for dinner.  But before I knew it, I was addicted.  I would go every day, for an hour or two.  I would see how long I could stay on the elliptical until my vision would start to blur.  My longest was two hours.  TWO. HOURS.  That is literally so long, I have no idea how that even worked.


One of the reasons I loved the gym during those days was the scale in the weight room.  I would go take my shoes off, step on the scale, and watch the number get lower and lower with every passing day.  It was like a drug.


When I hit my lowest weight, I broke up with the gym.  Whenever I would go, I would see people look at me in horror (I know why now, but back then I felt like I was being bullied) and whisper.  Sometimes they wouldn’t even try to be quiet, they would just say stuff like “Jesus CHRIST she’s skeletal,” full voice.  Furthermore, it was getting harder and harder for me to get my heart rate up.  So I stopped going, opting for long walks.  I would disappear for hours, just walking around, trying to get a “work out” in.  This was a habit I kept up until I started treatment.


It was a while before I got myself back in a gym.  It was equal parts triggering and depressing for me to be inside of one.  First of all, there are mirrors everywhere.  Second of all, when you’re on a machine, you’re alone with your thoughts - bad self talk and all.  I joined a gym in St. Pete and the first few times I went were torture.  I thought about cancelling my membership, but I pushed through it.  I closed my eyes everytime I passed by a mirror.  I figured out how to do it without hating myself, and working out felt good.  And then in July, on a complete whim, I started going to a group class.


I had never done anything like that before.  The gym was always alone time for me, special time where I could tune in to my disorder and push myself.  But before I knew it, I was smiling and laughing along with the people in the class.  I was listening to my instructor, instead of the voice in my head who doesn’t really know...anything.  I wasn’t spending hours on an elliptical, just trying to burn as many calories as possible.  Instead, I was doing all sorts of movements, punching, kicking, working muscles I didn’t even know I had.  I was watching myself in the mirror and not grimacing.  Furthermore, the class is only 30 minutes, three times a week.  It keeps me accountable so that my gym time doesn’t get out of hand.   I have no idea if I have lost any weight since I started going (I don’t do the scale thing anymore) but the crazy thing is that I don’t care.  I go because it’s fun. I go because it’s not a chore; I genuinely enjoy doing the workouts Jamarcus creates for us. I go because it has worked wonders for my aggression.  I go because I’ve made friends there.  I go because it’s 30 minutes where all I have to think about is the music and the movement. 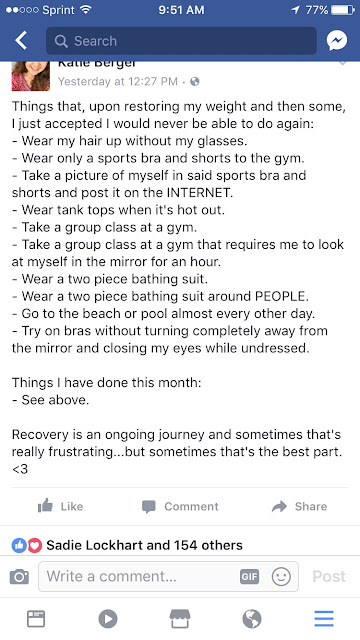 So what is the point of this post?  Well, I say it all the time, but this is a story about how recovery doesn’t end!  I had made peace with the fact that I would never do a group class, that I would never watch myself in a mirror, that I would never just throw on a sports bra and walk around in it.  And I was okay with all of those things.  But then...suddenly...I was able to do all of those things, and more. It’s a reminder to be kind to yourself, but never stop challenging yourself.  If you are currently IN TREATMENT: LISTEN TO YOUR TREATMENT TEAM.  Please don’t go hit the gym because of this post.  I was fully restored and in good health before I started going again.  I took a very long break from it, and that was the best thing for me.  Do what is right for you!!  Exercise addiction is a very real thing and should not be normalized.  Please reach out to me if you feel like it’s something you’re struggling with!


I don’t think that going to a gym class has to be a part of everyone’s story.  But I’m glad it’s (finally) a part of mine.